Ukraine: ‘We try to tell them the truth’ – parenting in wartime 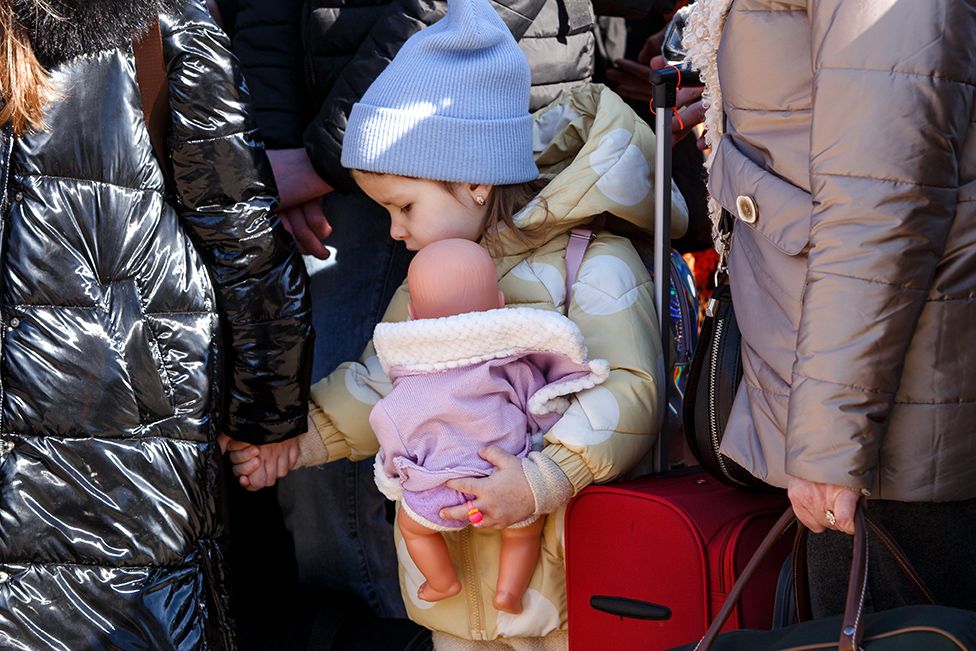 A little girl clutches a doll at a checkpoint on the Ukraine-Slovakia border
In Ukraine, families are having to adapt to a terrifying new reality. How do you tell young children that you’re at war?

Ten days ago Anton Eine, a science fiction writer in Ukraine, had been due to launch his latest book – but then the Russians invaded. Now, he says, none of that matters any more. He is hunkering down in Kyiv with his wife and their three-year-old son.

They live in a 24-storey apartment block with an underground car park, where people are sleeping on the concrete floor. It’s bitterly cold, and Anton is worried about what might happen if the building collapses, so he and his family feel safer in a square concrete well between the lifts. That has become their sanctuary during the constant air raid sirens. They bring toys and their son’s tablet and make sure he sits in the corner, which is the safest place.

Anton says their son is worried, and asks lots of questions. “Yesterday, my wife went downstairs and when she returned, he was asking, ‘Mum, did they shoot you?’ and she said ‘No baby’, and he said, ‘Will they shoot me? I don’t want them to go bang-bang’.”

How to deal with your anxiety about the Ukraine crisis

Anton says some parents have sewn badges with their child’s blood group on to their clothes and are teaching them their home address and parents’ names, in case they are separated. And while they hide in shelters or try to board trains to safety, many parents are also talking to each other about how the war is affecting their children, and how best to protect them from trauma.

“Some parents tell the kids it’s a game,” says Anton. “We are trying to tell our son the truth, but in a softer way, adapted to the mind of a three-year-old kid.

“We tell him that bad soldiers attacked us and the good soldiers, the ones with the Ukrainian flag, are the ones who protect us, and you don’t need to worry here in this sanctuary.”

His own son’s drawings don’t appear to show any signs of trauma, but some of Anton’s friends have older children, and the pictures they draw clearly show they’ve been affected by the situation. 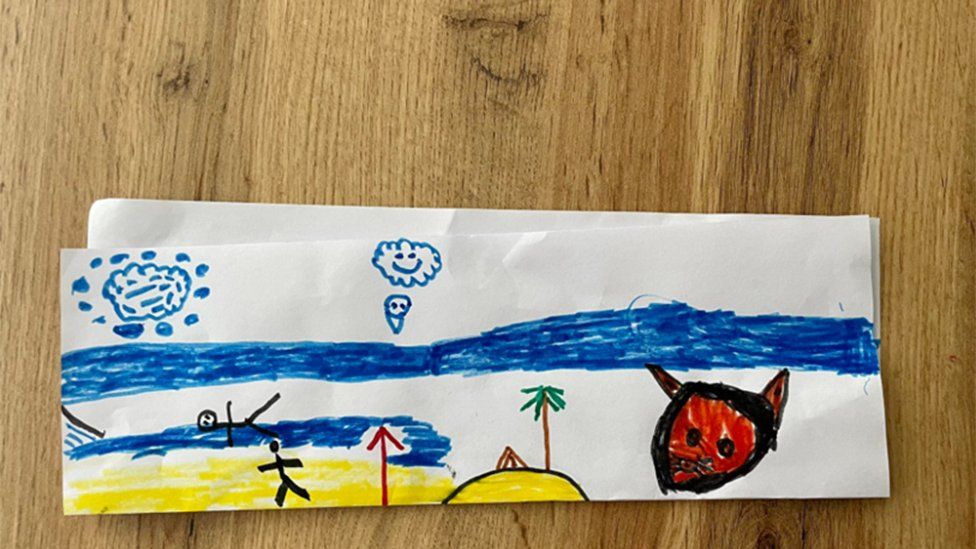 A friend of Anton’s shared her four-year-old son’s drawing after spending the night in a bomb shelter – it shows people fleeing a big red devil
The parents and staff from his son’s nursery stay in touch via the social media app Telegram, where they share advice about how to talk to the children about what’s going on. This even included a tutorial on how to explain to the kids why it was OK for adults to swear now, while it was not OK in normal life. “Because people are swearing right now,” says Anton.

They have become more relaxed about other little things, too. “Because of this situation, he has to watch much more cartoons than normal, and is eating much more sweets than normal. We need something to occupy him – he has to not pay too much attention to what’s going on.

“The psychologists advise us to be gentler with kids in these times, and to love them much more than usual,” says Anton.

When it comes to safety, though, they have to be quite strict. Their three-year-old quickly learned that when there’s a siren, the family have to run and hide. “As soon as we hear sirens or get a notification we shout, ‘To the shelter!’ and whatever he’s doing he leaves it and runs. He understands that the situation is extraordinary. It even surprises us how well children understand the necessity to behave properly.” 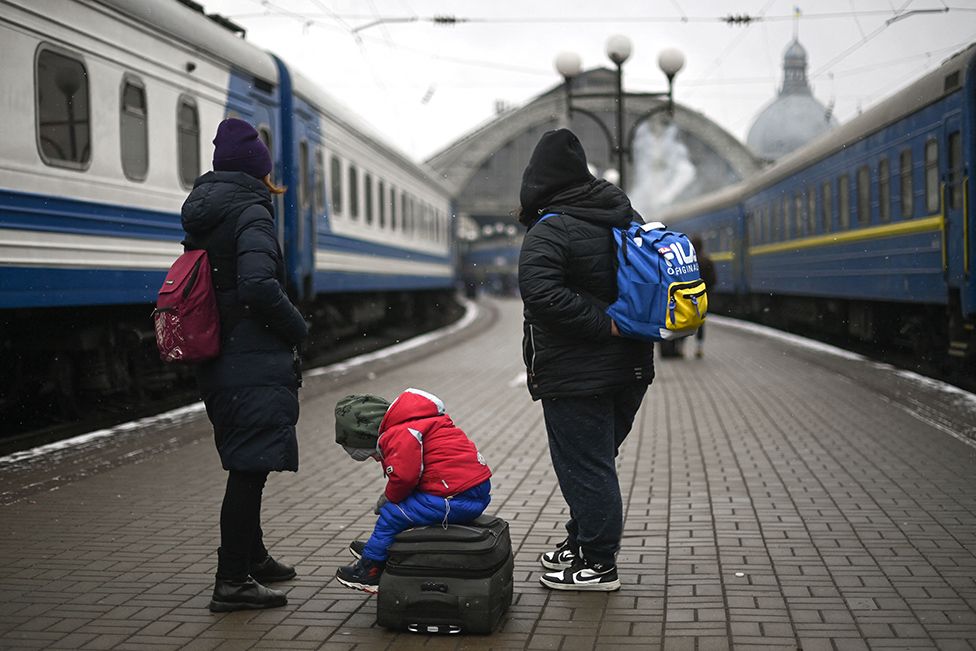 Evacuees and a child, sitting on top of a suitcase, wait for a train to Romania from Lviv
As the Russian shelling gets worse and the convoys close in, many Ukrainian parents have decided to flee their homes with their young children in tow.

Hanna, a scientist, left Kyiv and travelled to Poland with her two sons, who are eight and six years old. For days, they had been at home listening to explosions, the windows trembling, and she somehow had to tell them what was going on. She found it hard to strike a balance between reality and how much a child’s mind can take.

“This was a challenge for me as a mother because I have to choose between how to explain the truth, but at the same time not to scare them too much,” she says. “So I was just telling them that we are under attack, and at the moment we are safe, but when we feel we have to move, they have to listen.”

Her parenting style had to change, too – there was no room for discussion. “Normally I ask them to do something, but this is a time to get orders.” 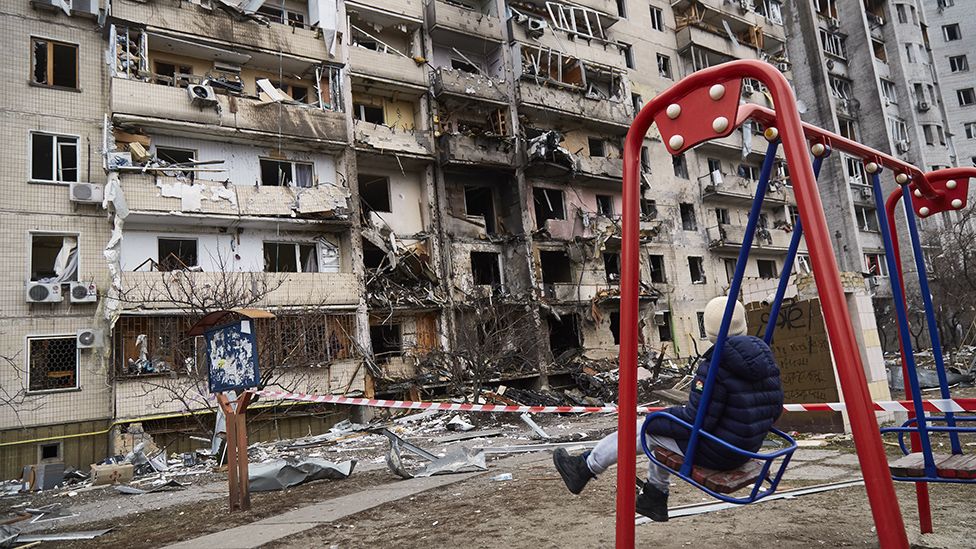 A child on a swing outside a residential building in Kyiv damaged by a missile
After a few days of shelling, Hanna felt she no longer wanted her children to hear the bombs and decided to leave Ukraine. “It was a very, super hard decision,” she says.

Her children had to make a hard decision too – they could only take one of their toys. Her eldest chose Toothless, a toy dragon from the How to Train your Dragon series, and her youngest chose a Transformer toy car that turns into a robot. It was a huge decision for them, says Hanna – perhaps as momentous as it was for her to leave her country. “I think that we were in the same emotional decision-taking position.”

It took them 52 hours to reach safety in Poland. Hanna’s ex-husband came with them for the first part of the car journey but then had to turn back, to fight. Hanna says travelling in a war zone with two kids was exhausting and she can understand why many of her friends are choosing to stay nearer home.

Now they are safe, but the boys ask lots of questions, about their grandparents and especially their father, who has stayed behind. “Heart-breaking questions, because they ask me every day if he is alive, or if he still has his hands and legs. They are afraid that he can get super hurt.”