Convoys of civilians are due to leave several towns near the Ukrainian capital, Kyiv, according to regional leader Oleksiy Kuleba.

Ukraine says it has agreed a 12-hour ceasefire with Russia for six routes in the war zone, and Mr Kuleba said the first groups had already left.

Russian shelling has continued with further reports of civilian deaths.

Ten people died in Severodonetsk in the east and five people were killed in Malyn near Kyiv, Ukraine says.

Sumy governor Dmytro Zhyvytskyi said a night air raid on Monday flattened six houses and three children were among 22 people killed. “Three bombs in one evening… It was a terrible night,” he said.

Fighting is continuing north and north-west of Kyiv as Russian forces continue their offensive. Ukrainian MP Inna Sovsun told the BBC that the Russian military was struggling to make significant progress. Air raid sirens were heard again in cities across Ukraine on Wednesday.

Ukraine’s armed forces agreed to stop firing on Wednesday along six evacuation routes for 12 hours, from 09:00 to 21:00 local time (07:00 to 19:00 GMT). They urged Russian forces to fulfil their commitment to the local ceasefires. 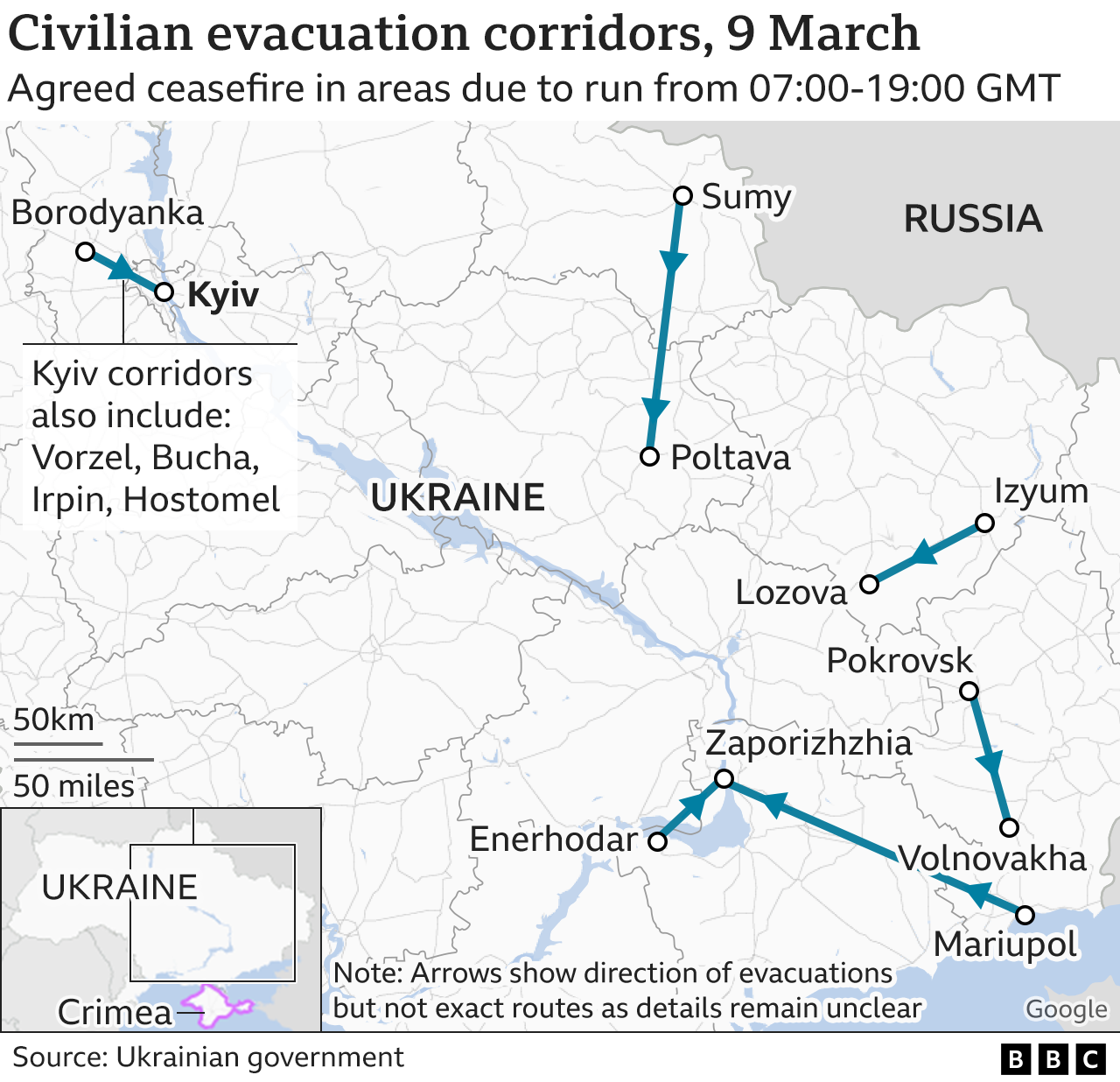 Mr Kuleba, who heads Kyiv’s regional administration, said civilians were due to leave Bucha, Irpin, Hostomel and other towns targeted by Russian bombardment. “I really hope everything will be fine and we’ll look after our people.”

Police said convoys of buses and other vehicles were on their way and they asked residents to follow their instructions.

The mayor of Russian-controlled Enerhodar in the south said civilians had begun boarding buses to leave, but in the north-east officials said another key corridor from Izyum, southeast of Kharkiv, had to be halted because of Russian bombardment.

A woman called Valentina with relatives in the northern city of Chernihiv told the BBC that Ukrainian soldiers had prevented a column of civilians leaving by car on Tuesday.

She spoke to her relatives early on Wednesday: “They were turned back by Ukrainians and were told there were battles on the road. Today they tried again. Yesterday somebody came in the other direction along the road, so it wasn’t closed.” She also said the people in Chernihiv, hiding in cellars from daily Russian missile attacks, had not been told about the evacuation corridors. 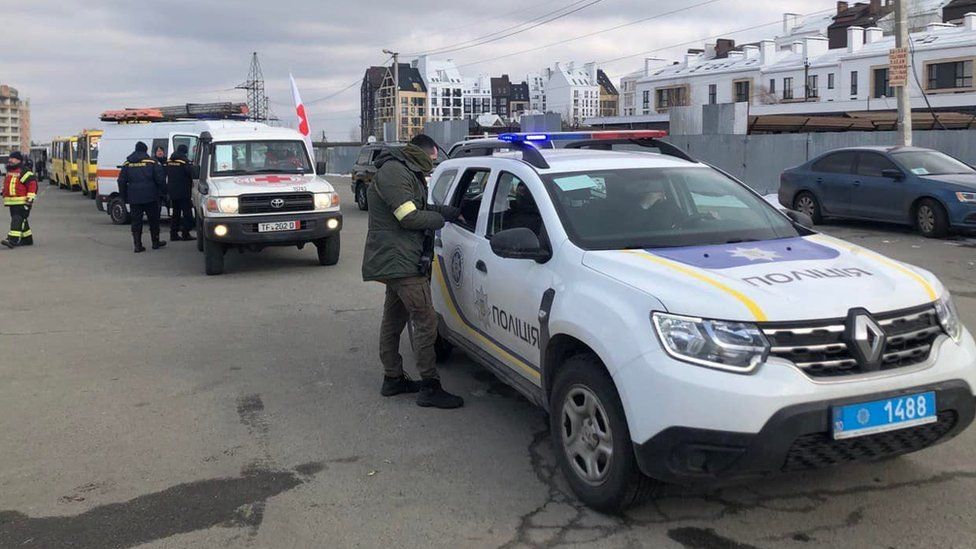 Ukraine managed to carry out its first mass evacuation on Tuesday, bussing an estimated 5,000 civilians from Sumy to Poltava, in the centre. The convoy took almost 12 hours to reach the city, forced to drive a long way round areas of active fighting.

BBC correspondent Sarah Rainsford watched the arrivals leave crowded buses and rush for a waiting train. The convoy took almost 12 hours to reach the city, forced to drive a long way round areas of active fighting.

Many on the first convoy out of Sumy were medical students from India. One woman described two “miserable” weeks living mostly underground with dwindling supplies of water and food. “We were starving,” Manisa said.

Another Indian student said the situation, under Russian fire, had been getting worse and more frightening each day.

Ukrainian authorities have previously accused Moscow of shelling a refugee corridor out of the southern city of Mariupol, which is surrounded by Russian forces. Ukraine rejected earlier offers of evacuation routes going to Russia or its ally Belarus.

In some cases Russia has been accused of shelling the exit routes. Ukraine’s military says its troops have repelled Russian advances north of Kyiv and in Kharkiv, which has been heavily shelled. 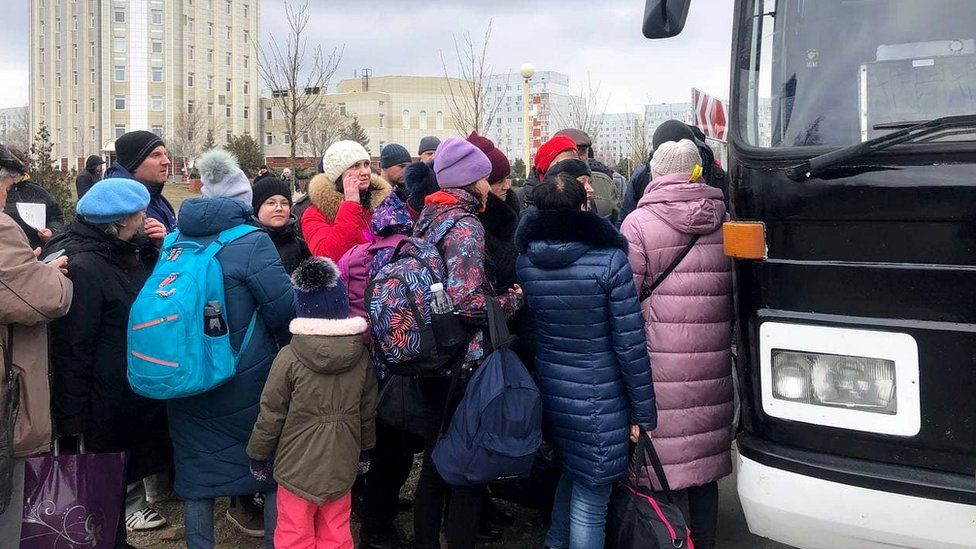 Ukraine’s armed forces command says its Kyiv troop grouping is “repulsing the enemy’s offensive”, inflicting damage and firmly holding their positions. Russia’s military has not commented on the Kyiv offensive.

He also reported Russian air and ground attacks in the Izyum area. He said Russian troops were assembling pontoon bridges across the Seversky Donets and Bereka rivers.